A line of diffusion testing products that stands beyond compare!

The new Phoenix™ dry heat diffusion testing systems from Teledyne Hanson Research provide manual and automated instruments that are more compact, easier to use, and more precise than conventional systems. The Phoenix family includes an advanced cell design, a six‐cell manual sampling system with a compact footprint, and an automated sampling system capable of testing up to 24 diffusion cells at once. The Phoenix DB-6 and Phoenix RDS systems and their components are protected under U.S. patent 10,753,841.

Heating of the receptor media comes from the DB-6 dry heat block programmable from 25 °C to 45 °C with a stated accuracy of ± 1.0 °C, while actual performance is typically within ± 0.3 °C. With the dry heat approach, there is no longer any need for conventional water pumps, jacketed cells, and a network of tubing running into and out of each cell. Heat-up is fast. Starting at room temperature, the DB-6 block and its six diffusion cells typically reach the desired set point in 30 minutes or less.

An important advantage of the Phoenix DB-6 is the speed with which the receptor cell’s contents are homogenized. A critical factor in diffusion cell testing for IVRT and IVPT applications is the uniformity of the receptor media. Any unmixed, high concentration of API dwelling directly under the membrane will slow the diffusion process, affecting test results. The Phoenix system resolves this issue through custom-designed mixer-inserts inside each cell, driven by powerful brushless motors. The combination of grooved mixers and strong magnetic drives prevents the formation of diffusion-rate barriers directly under the membrane, thereby reducing variability of test results. Stirring speeds are programmable from 200 rpm to 900 rpm with an accuracy ± 10%.

An air bubble trapped beneath the membrane in a vertical diffusion cell can be a source of release-rate variability. In the Phoenix system, bubble detection and removal is fast and easy. Bubbles are easily detected using a lighted mirror. When a bubble is found, the analyst simply lifts and tips the cell to move it out through the top of the sampling arm.

Phoenix DB-6 blocks are designed to reduce costs when scaling up operations and transitioning from manual sampling methods to automated sampling using the Phoenix RDS platform. Each DB-6 block can be installed onto the Phoenix RDS robotic sampling platform without modification.

The Phoenix DB-6 is controlled by an advanced single-board computer built into the color touch screen display. The Linux-based operating system with its own SQL database provides outstanding memory and processing speed.

Power and serial communications occur through a cable connecting the display to the DB-6 block. The tethered display can be hand-held or moved to any nearby location, while a magnetized back allows it to attach to the front or side of the DB-6.

The highly durable resistive touch screen responds instantly and works with labs gloves on or off. The intuitive, user-friendly interface of the DB-6 replicates the familiar look and feel of Hanson’s proven line of Vision G2 instruments. During a test an easy-to-read screen displays temperature, stirring speed, elapsed time, and time to next sample. As a sampling point approaches, the system provides an audible alert and a countdown.

The Phoenix RDS platform provides fully automated sampling and collection for either six or twelve vertical diffusion cells in a compact footprint, using the same heating and stirring blocks as are found in the DB-6. A third block holds a wash station and up to five additional media sources. Samples are collected into 12×32 vials with pre-slit septa. Controlled by Teledyne Hanson’s Diffusion Master™ software, up to two RDS systems (24 vertical diffusion cells at once) can be operated independently from a single computer workstation.

Automated sampling using an angled probe simulates manual methods. The sample is withdrawn, collected, and then media is replaced.

Volumetric accuracy meets or exceeds ± 1% or 25 µL. Staggered sampling with pre-programmed offset times makes test preparation easier. Rapid sampling requires just two minutes per cell. Carryover prevention is excellent. Typically as little as 200 µL is needed for rinsing, and custom wash protocols allow the analyst to clean the probe with one or more solvents at once or with air.

The RDS is designed to provide a broad range of programming capabilities to the analyst, including rapid setup of diffusion test parameters; configurable instructions to operators; sampling, wash, and rinse configurable on a cell-per-cell basis; speed and temperature changes during run; ability to add media to offset evaporation; ability to run different cell groups with different settings. The RDS platform supports Shimadzu, Waters, Agilent, and Thermo-Fisher trays, with a maximum drawer capacity of 108 vials (when using two trays).

Phoenix DB-6 blocks are designed to reduce costs when scaling up operations and transitioning from manual sampling methods to automated sampling using the Phoenix RDS platform. Each DB-6 block can be installed onto the Phoenix RDS robotic sampling platform without modification.

Minimum requirements when server and client are running on the same PC are as follows:

The most critical aspect of any lab testing instrument is its ability to produce results that are accurate (true) and precise (consistent from one test to the next). Variability—the enemy of precision—comes from inconsistencies in the test instrument itself, the test procedure, and the materials being tested.

With these factors in mind, the Phoenix dry heat diffusion cell is designed to eliminate instrument variability while significantly reducing the potential for procedural inconsistencies (operator error). By incorporating improvements based on Hanson’s 30 years of experience in manual and automated diffusion cell systems, the new Phoenix cell is more durable and easier to operate while providing significantly better test results.

Constructed of precision-bore tubing such as found in barrel syringes, each borosilicate glass cell is dimensionally consistent with the next. The generous 9 mm internal diameter of the sampling arm promotes rapid homogenization of receptor media and allows the use of standard pipette tips to save on costs. Standard 16 mm evaporation caps fit onto the flanged end of the sampling arm.

Phoenix cells are durable, portable, quick to assemble, and easy to clean.
Three different styles of cell cap kits are designed to work interchangeably with each cell.

Phoenix diffusion cells allow the analyst to adjust receptor media volume simply by changing the mixer-insert. The use of the short mixer-insert (13 mm height) provides the maximum available volume for a particular cell size. The tall mixer-insert (30 mm height) provides a lesser volume while still allowing samples to be taken from the center of the main body of the cell as specified in USP <1724> Semisolid Drug Products—Performance Tests.

Volumes shown are nominal; actual volumes will vary and are determined by measurement of each specific diffusion cell assembly in the lab.

Phoenix DB-6 blocks are designed to reduce costs when scaling up operations and transitioning from manual sampling methods to automated sampling using the Phoenix RDS platform. Each DB-6 block can be installed onto the Phoenix RDS robotic sampling platform without modification. receptor media below the membrane). To prevent the formation of a region of high concentration just under the membrane—which would inhibit further release of API—molecules passing the membrane must be quickly dispersed throughout the receptor media.

In Phoenix systems the continuous dispersion of API is provided by grooved mixers rotating inside the diffusion cell, powered by six magnetic drives with brushless motors embedded in the DB-6 heating/stirring block. The innovative mixers produce strong currents capable of reaching every part of the diffusion cell, including the entirety

Further tests of mixing effectiveness on 27 groups of 6 cells each, running at a low speed (200 rpm), with Hydrocortisone cream analyzed by HPLC shows aliquots taken from the sampling arm and from the main body of the cell have the same level of concentration. For further details see “Apparatus Performance Report 99390008 Rev. 08-18 Phoenix Dry Heat Systems.”

The Phoenix mixer-insert also provides the analyst with the ability to use the same diffusion cell for two different receptor media volumes. Each cell size (small, medium, large) allows two different mixers with heights of 13 mm or 30 mm, thereby adjusting the amount of receptor media by volume displacement.

In diffusion cell testing, the active pharmaceutical ingredient (API) passes from the dosage chamber into the receptor medium in an amount proportional to the exposed area of the membrane, as determined by the orifice diameter. Phoenix cell cap kits are designed to provide analysts with precise control over this critical factor. In each cell cap kit, the orifices of the dosage chamber above the membrane and the cell cap below the membrane are machined to tight tolerances for diameter and concentricity.

Two orifice diameter sizes are available for each small, medium, or large cell. Depending on the cell size and the cap kit selected, orifice diameters range from 9 mm (membrane exposed area 64 mm2) to 20 mm (membrane exposed area 314 mm2). The diameter and height of the dosage chamber above the membrane determines the maximum amount of drug that may be tested. When a greater amount of the formulation is required for a test, select a cap kit with a larger dosage chamber.

Two general styles of cap kit are available—threaded and press-on. The threaded style of cap kit includes a threaded clamp ring above the dosage chamber, which allows an adjustable amount of force to be applied to hold the membrane in place. This feature is useful in applications where skin and other membrane types may shrink, swell, or otherwise deform during testing. Threaded cap kits are made from PTFE (polytetrafluoroethylene), sealed with O-rings made from either fluoroelastomer (Viton) or perfluoroelastomer (Kalrez). 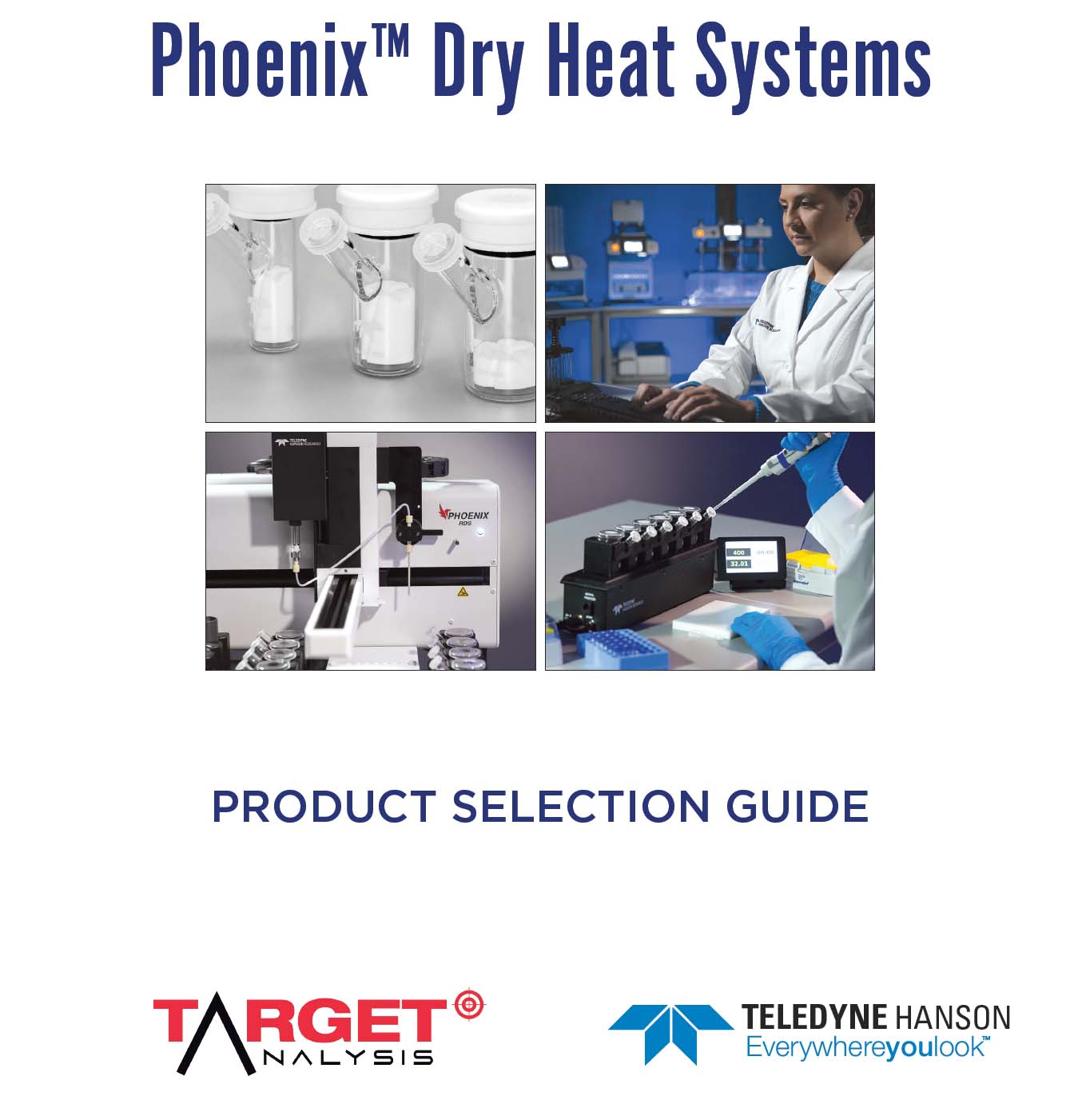 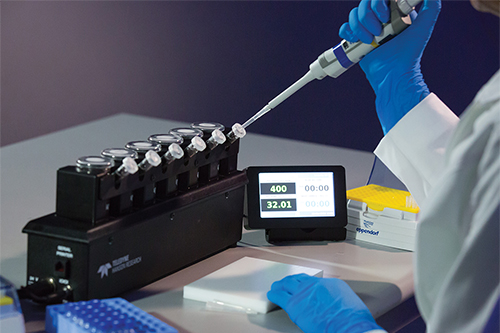 In diffusion cell testing, the active pharmaceutical ingredient (API) passes from the dosage chamber into the receptor medium in an amount proportional to the exposed area of the membrane, as... 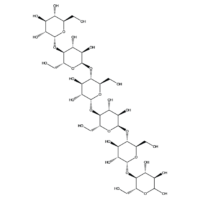 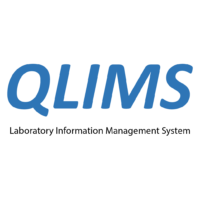 "A great product can last forever"